This weekend I’m in the mood to give away yet another freebie to entertain people during lockdown. This follows on my free eBook deal three weeks ago. Many thanks for all those lovelies who downloaded Noah Padgett and the Dog-People onto their Kindles, and also to those who decided to buy the paperback version instead 🙂

The Kindle free offer for my novel Desiccation is for today and tomorrow (June 6-7) worldwide on Amazon. Here’s my Booklinker url that should work for most of you (myBook.to/QuirkyLit). If not, just go and type the book title and my name into the Amazon search bar.

Desiccation (published in 2015) is a mix of science fiction and urban fantasy suitable for anyone over the age of thirteen. As with my Noah Padgett novel, I suspect that most of my readers have been adults, despite it being listed as a young adult novel.

See below my blurb for Desiccation, as shown on my Amazon product page…

In 1967, mayhem erupts at an elite English boarding school.

The head girl Samantha is a sociopath, determined to exploit every loophole in the system. After her venture to set up a nocturnal brothel in the gymnasium proves a flop, she invites a disgruntled customer – mod gang-leader, Joe – to a midnight séance in the library. But she hasn’t bargained on his becoming the conduit for a powerful malign force bent upon the destruction of worlds.

The teachers and pupils soon undergo extreme personality changes and develop a hive mentality, determined to ensnare everyone into its collective conscience. When science scholarship girl Janet fights back, she becomes the despised outsider, shunned by the hive but stalked by the head girl, who no longer speaks in her own voice but that of the delinquent mod Janet has seen hanging around the school.

In mortal terror and with her credulity already stretched to the limit, can she throw her trust upon the hippie pixie that lives in a gargantuan psychedelic toadstool behind the school swimming pool and who claims he’s an expert in repairing interdimensional rifts?

Yay! It’s sale time, starting tomorrow. And I’m going for one increment, which means that for six days, from March 2 – 8. the Kindle version of my YA science fiction/urban fantasy novel, Desiccation, will be on sale on amazon.com and amazon.co.uk at $1.37/£0.99.

Its usual price is $2.99/£1.99, so if you’re a reader who prefers to buy a début author’s novel at a bargain price, here’s your chance. Of course, once you’ve read this novel, I hope you’ll become loyal fans itching to buy my next book at its full price when it comes out 😉

Whilst posting, I’d like to say a huge thank you to those of you who entered the recent Goodreads Giveaway to win a paperback copy of Desiccation. A whopping 1,005 people entered this draw, about 380 added it to their too-read shelves, and the lucky winner came from the US. 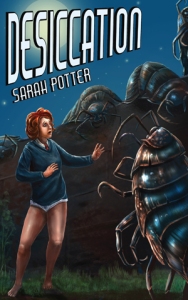 Publication Day for my Urban fantasy novel Desiccation in mid-December came and went without much panoply on my part. This was mainly because I was suffering from post-flu exhaustion and felt in no mood to uncork the champagne, let alone shout from the rooftops. Despite this, a modest number of wonderful people — some of them my fellow bloggers — purchased my book and, to my absolute surprise, I’ve sold paperback and kindle editions in equal quantities.

So a big thank you to all you early birds. And an especially huge thank you to Dave Farmer, who read my book over a course of a few evenings and found the time to review it on Amazon and on Goodreads before Christmas, giving it 5 stars.

Indeed, most of the world seemed distracted by the pre-Christmas rush, followed by post-Christmas malaise, plus the stagger on into New Year with no time for reading and little money left for buying books. And would you believe it, about a week before Christmas I caught a cold on top of the flu? — albeit not a bad one, but enough to drain me of any energy to market my book and enough to make me lose my singing voice just when I needed it most.

Anyway, enough of that. I’m feeling like my old self today and raring to jump into the driving seat of my virtual convertible to vroom around the blogosphere on a tour.

All invitations most welcome!

As a little post script, I’d like to add that Jamie Noble Frier, the super-talented artist who produced my book cover, now has his blog interview questions to hand and should be guesting here soon.

And yet another post script — I’ve just revised my Publication Updates page to include links to all the places around the world that my book is available to buy!

Still pinching myself to check that I’m awake, but somehow I’ve managed to achieve publication of my urban fantasy novel Desiccation. It is now available to buy in Kindle or Paperback format at Amazon.

You may ask what a yellow teapot has to do with publication day. Anybody into dream analysis around here? Personally, I think it indicates that writing, editing, formatting, and publishing can take you to the brink of insanity. It also indicates that I watch too much Nordic Noir on television, not that I know if the Scandinavians are into yellow teapots.

In my dream, I was inside a giant yellow teapot manoeuvring it into a parking space outside a golf club. Once I’d parked it, I climbed out of its top (the equivalent of a sunshine roof) and magicked the teapot down to normal size, after which I proceeded into the golf club to search people’s coat pockets as part of a covert operation to solve a crime.

Well there you are. If you think my yellow teapot dream is weird, I can assure you it’s nothing compared to some of the weirdness in Desiccation.

If you would like to find out more, please do visit my page Desiccation (Blurb).

Aware that I haven’t posted much in the last week or two, I thought to delight you with this busy picture of pond life that I drew for my Nature Study homework at the age of eight.

Working on a story set in a school — albeit a senior school — has made me think back to my own studies as a child. At primary school, Nature Study and Art were my two favourite subjects. The main character in my novel, Desiccation,  is a 15-year-old science scholarship girl who discovers that not everything in the universe runs according to the textbook.

I am nearly there with publishing, but it’s taking longer than I expected. First I took a short break to visit family in the Isle of Wight. Then I had flu. After that, in my attempt to catch up with the final proofing and corrections of my novel, I gave myself a frozen shoulder by spending too much time on the computer. But I’m on the mend now, thanks to homeopathy and qigong exercises.

Will return to regular posting, plus visiting everyone’s wonderful blogs, as soon as possible.

Missing you all, of course.