For many years I was an avid traveller of far-flung places – basically, anywhere warmer and drier than the UK was my motto. I always favoured those warmer climes, and my passport collected stamps of places like Australia, Egypt, Tunisia, all over mainland US and Hawaii, New Zealand, China, Africa (north, east, and west), India, and much of the Near- and Middle East, plus most of Europe.

Now, I was no rich bitch cruising around on papa’s cash; just an ordinary guy in search of adventure. From the age of 12-13 saw me hitchhike, cycle and train travel much of the UK, before escaping by channel ferry in the early 80s following a bereavement and a subsequent engagement that had gone a bit skewwhiff. And so off I toddled ‘to find myself’ – dunno if I can say I ever did, by the way, but that quest kept me on the road for some three years.

I then returned to the southern shores of dear old Blighty, and eventually settled down, got hitched and found myself stuck deskbound in a semi-respectable job in a bank (after a hearty dose of BS tendered to pass the interview). For the next 15 years or so I worked my up the greasy corporate ladder, ending up in the spotty-faced world of mainframe programming and IT management, way up in Yorkshire. Flat cap, dog, motorbike, and a hilltop stone cottage built c.1750 was the order of the day…. BUT travelling was still central to my agenda. Using all my annual entitlement, plus time-off-in-the-loo, my wife and I mustered some 5-8 weeks away on yonder shores each year.

Many times we came to Turkey; not to the touristy bits, but sampling rural village life, with eventual plans to retire early in such a place – doing what hadn’t even been considered at that stage. This mixed-up lifestyle continued for over a decade, forever working 60-80 hour weeks in order to travel in our spare time.

My wife was called upstairs rather early by the big man himself, and the work/holiday lifestyle, the job, the plans… well, they all seemed a bit daft really. So faced with a crossroads (my life, not that soap with Benny), I decided to jack it all in and do something; I emigrated to Turkey, became a fruit farmer, remarried, became a middle-aged pop, naturalised as a Türk and then wandered into blogging…

My life all seemed quite ‘normal’; until I wrote it down J

To summarise; my life’s guide very much aligns with the words of a certain seagull. The image that follows is a scan of an old postcard that I have had close by me for 30 years… 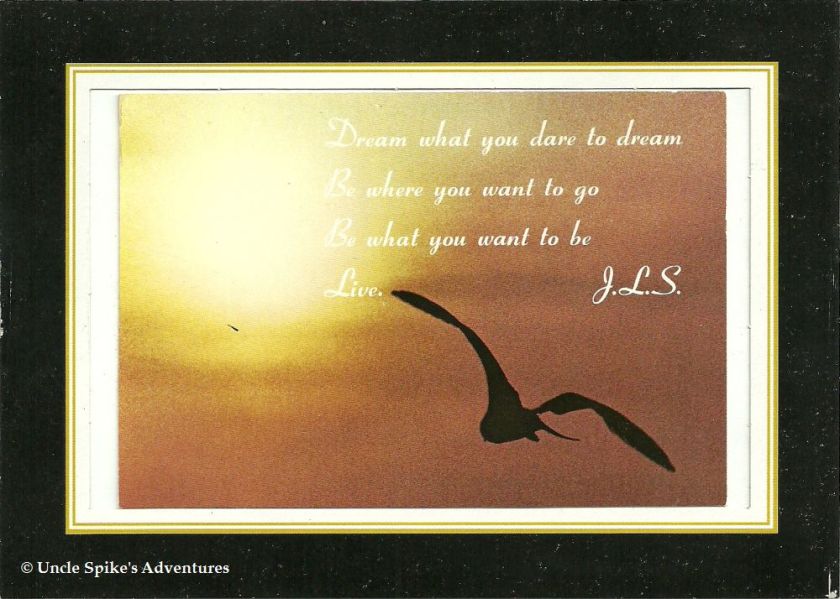 Thanks for your hospitality Sarah J

Sarah says: It’s my pleasure, Uncle Spike, and thank you so much for accepting my invitation to guest here.

As an avid follower of your most entertaining blog, Uncle Spike’s Adventures, it was great to learn more about the man behind the Turkish fruit farm!

Not on the menu,
she stands alone in protest —
a wooden turkey.

February might seem a strange time to write a protest haiku about turkey welfare, but Christmas and Thanksgiving aren’t the only times people eat the meat from these birds. As I post this haiku, there are billions of  turkeys undergoing the torture of factory farming. This happens 365 days a year.

Below are some links to “Compassion in World Farming” and “mscpa angell” — organisations which expose the horrors of this industry and look at ways to improve animal welfare.