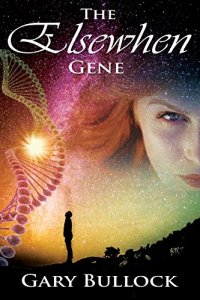 I adore time travel romances, so was thrilled when Gary Bullock asked me to beta read his wonderful novel and write an honest review after the book’s publication.

The Elsewhen Gene is entrancing and brought many smiles to my face. It is one of those novels that has a real feel-good factor about it and reminded me that hope and beauty still exist, as well as innumerable mysteries on a cosmic scale. The writing flows with the same gentle forward momentum and intertwining of light and shade as a sun-mottled brook. The descriptions are vivid and the dialogue authentic to the characters, whom I adored.

Laura and Elijah are both science geniuses and soulmates since childhood. Elijah sees future events. Laura sees what she thinks are ghosts but are really people in another universe into which she can sidestep at will. A romance between two such unusual people is never going to run according to convention, when it involves multiple universes and alternate lives. But it is a story of enduring passion between them both, as well as their crusade to reunite another couple who have ended up in separate universes to each other.

The novel has a most satisfactory end, but I am hoping that the author has more adventures in store for Laura and Elijah in a possible sequel.

The Elsewhen Gene is available at any of the following links

Gary Bullock was born and grew up in the hills of East Tennessee, then worked in New England, where he got his first film acting job, as Abraham Lincoln in a commercial for a Detroit radio station. He met his mate, Mil Nicholson there, and they were married in 1987 at the Merrimack Repertory Theatre on the set of The Importance of Being Earnest.

They moved to the Blue Ridge mountains of North Carolina, where he won his first film role in Winter People. He has also toured with Poetry Alive!, performing poetry in schools all over the East. He has written and performed his own one-man show as Abraham Lincoln. He and Mil also worked in dinner theatre, and carried out an artist’s residency program in theatre in Western North Carolina schools.

Gary and Mil then moved to Los Angeles in 1992, just in time for the riots, the fires, the floods, and the Northridge earthquake, and a co-starring part in Twin Peaks –Fire Walk With Me. Some other notable film roles were in Lakota Woman and Terminal Velocity, and most recently, Racing Stripes. Gary was a member of Playwrights Kitchen Ensemble in Hollywood as an actor, then later became a writer/actor member of Playwrights 6, also in Hollywood. Two of his scripts and part of a third were developed there.

He began writing partly to preserve his sanity during slow times for acting work, and because there were stories he wanted to tell. He soon found that he loved it. He has written both in book and in screenplay form.

Gary and Mil returned to North Carolina in 2005, and are busy writing, recording audiobooks, raising apples, persimmons, paw-paws, a large organic garden, dogs (a Jack Russell and a Silken Windhound at present), and watching the wildlife.

9 thoughts on “Review: The Elsewhen Gene by Gary Bullock”