Today, I’m delighted to welcome to my blog for an interview the super-talented Mil Nicholson, narrator of the audio version of my children’s crossover fantasy adventure Noah Padgett and the Dog-People. Mil has an amazing talent for switching voices and accents for the different characters with a natural ease that draws you deep into the story. On top of that, she has a real soft spot for dogs, as you can see in this picture of her in LA with her pound dog, Florrie, whom she loved dearly. 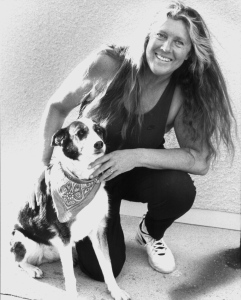 Mil, when did you decide to become a professional actor and where did you train?

At birth. Most babies cry something incomprehensible,  I yelled “Oh! for a muse of fire”.  My first acting role was as the Sad Fairy at age seven. I didn’t train, but at seventeen was awarded a scholarship to the Royal Academy of dramatic Art in London. Sadly, I couldn’t  participate due to family matters.

In theatre, playing Doris Wilgus opposite my dear husband, in The Owl and the Pussycat was a joy. Nurse Ratchet in One Flew over the Cuckoo’s Nest was a delight, and Meg in the boisterous Irish musical The Hostage, which ran for eighteen weeks, was a blast. Over the years I was fortunate enough to play Lady Bracknell, Cecily and Gwendolyn in three very different versions of The Importance of Being Earnest. In September this year I travelled to Provincetown, MA,  to reprise a role in Stage Moms performed seventeen years ago in Los Angeles.  It was daunting, until I stepped onto stage, and I was home again.

For movies, roles in Spy Hard, The Handmaid’s Tale and a YouTube of A Couple of Horses Asses. The latter has sound problems, which maybe someday we’ll fix.

You were born and raised in the North of England, although you live in the mountains of Western North Carolina now. What age were you when you moved to the US, and why?

Wallsend, the small town at the end of the Roman Wall, was my birthplace, then at age seven moved to Harrow, Middlesex. I and my three lads aged four, three, and two, sailed to the shores of the USA, on the Queen Mary, her last official run from England to America.  Their father was a ‘genius’ engineer, and a company in the USA was anxious for his services.

Your husband Gary Bullock is also an actor, as well as a writer. Have you ever starred in the same production?

Gary and I have acted on stage together in: Habeas Corpus, The Owl and the Pussycat, The Importance of Being Earnest,  Jigsaw,  Gallery, The Primary English Class,  and in movies had small roles in the same movie, but not ‘starring’ parts. Gary has a resume of his acting work on act2sc3.com. 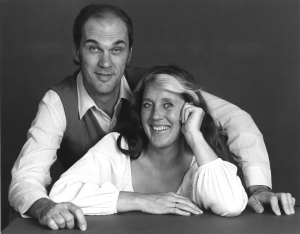 You are described on LibriVox as one of their “stars”, due to the excellent standard of your audio narrations and your dedication to the cause of making public domain classic novels available as audiobooks. I know that you’ve recorded eight books by Charles Dickens and three by Anthony Trollop, amongst others. Which book have you enjoyed reading the most and why have you taken on this momentous task as an unpaid volunteer?

As far as we are concerned, there are no ‘stars’ on Librivox; everyone is a volunteer on that site, and we are just happy to be a part. I love Charles Dickens’ writing; it’s just simply brilliant.  Many people have been put off, mostly from school, at the dull way his work was presented to them.  He’s absolutely hilarious, and in the dramatic areas tears will flow.  I thought, that maybe I could bring a version to the public which would show how wonderful his novels are. I believe I’ve made a small impact with close to half a million downloads, and e-mail from all over the world from listeners who have been brought back to his writing.  This is something money cannot buy.  Whoa, here I am getting on my hobby horse again, I think you get the picture. Any of  Charles Dickens would be my tops for favorites.

You’ve told me that Gary oversees the technical side of things with regard to your recordings. Briefly, can you summarise the process from beginning to end?

Gary is at the computer when I record. He listens for any errors or extraneous sounds.  If found, we stop, and I re-record the area. After the recording session he edits the track.  I then listen to the whole  session, and if I find anything to change, he then re-edits. When the book is finished, he “masters” it.  This comprises several different steps in order to have the recording as clear and noise free as possible. Gary has had praise for the sound quality from many quarters.

Do you, in turn, get involved at any stage in the creative process of Gary’s science fiction writing, or any other writing he does?

After he’s written for a while he’ll ask me to read it over, which is always my pleasure to do. He writes great dialogue in particular, and I get first look — Yay! We sometimes sit down together and try and come up with ideas, when writer’s block rises up. I recorded his first book, ’twas a grand time.

Why did you decide to audition and then sign up to narrate the audio version of my novel, Noah Padgett and the Dog-People? What was it about the story that particularly appealed to you? I know, for instance, that you’re a dog-lover.

Noah Padgett and the Dog-People, who wouldn’t want to check that title out? Well, I did, and the writing  was so good and concept  so intriguing I couldn’t resist auditioning. Yes, I do love dogs, and the characters in your book were such a pleasure to create voices for.  I could see each breed in my mind, and almost see their mouths working.  Plus Noah was such a super character, wise and childish at the same time. I could go on, but, I’ll just add, that it was my immense pleasure to record your book, and working with you has been a joy.  Plus, I must mention that your husband’s cover design is very professional and simply gorgeous. If this audio book doesn’t do well, I’ll eat my…..I don’t wear hats…..but scarf maybe!!! 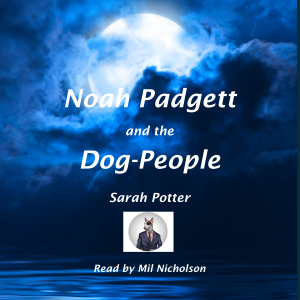 What are you working on at the moment?

I’m working on a fifth book in an Apocalypse series, and a Self Help book also part of a series.

What do you enjoy doing with your time, when you’re not acting or narrating audio books?

Playing with our dogs, playing solo video games……remember Pacman?  Exercising, I’m a WII person, playing badminton and ping pong, watching movies, writing as much as I can remember of my wonderful Mum’s stories for my sons to read, flying model airplanes, cooking, learning Latin, planning to get to the ocean as often as possible.

Thank you, Mil for your wonderfully entertaining answers and for taking time out from your tight schedule in the run up to Christmas. Wishing you and Gary all the best over the festive season.

And for the sake of any Star Trek fans (including myself), I just must post this shot of Gary Bullock acting the part of a Klingon. 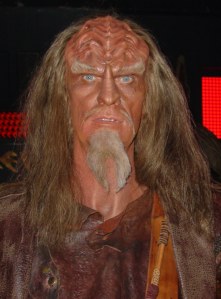 Noah Padgett and the Dog-People

Please note that non-subscribers to Audible CAN SIGN UP for a 30-DAY FREE TRIAL on AUDIBLE (co.uk) and (.com)

A Limited Number of FREE PROMO CODES are also available for people would like to listen to the Audiobook in exchange for an honest review.* Please leave a message on Sarah’s Contact Page, if you’re interested.  [*This offer is only available in the UK, which is the author’s country of residence].

Switch between reading the Kindle book & listening to the Audible narration with Whispersync for Voice.
Get the Audible audiobook for the reduced price of £2.99 after you buy the Kindle book.
Noah Padgett and the Dog-People is also available in Paperback.
Product Page Universal Shortlink for all versions: http://getBook.at/Zyx