I would be the first to admit that my new book, Deer Island, is a curious beast. It is short enough to be read in one sitting, and is something of a personal project, moving back and forth between tales from the streets of London, and from an almost uninhabited Scottish island. 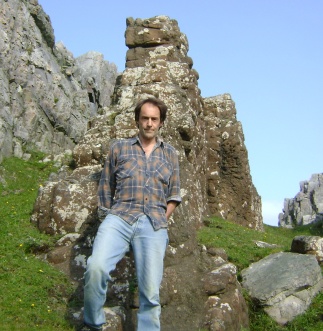 It is a story from my past that I felt was crying out to be written; that I needed to put down on paper in order to understand it myself. I have a habit of writing whatever takes my mood, rather than thinking about the market or the possibility of publication, and indeed this was not something that I ever really expected would see the light of day. But then I was contacted directly by a small press called Little Toller Books, asking if I had anything ‘short and quirky’ that didn’t suit my main publisher. I was a great admirer of this press – they have made their name reissuing out-of-print books of nature writing, the sort of books that I grew up with, and making a beautiful job of them – and I offered them Deer Island at once. It is now their first ever book of new writing, and yet it was written in a single draft and was barely edited at all. (You can read a summary of the book on the publisher website here.)

It is an uncompromising little book, something that no-one else could ever have written, yet I like to think that because it was written for love not money it has a certain kind of integrity, and I have been pleasantly surprised by the critical reception. The Independent called it ‘short, subtle and moving,’ and highlighted how it flew in the face of convention. ‘Ansell might have thought of expanding his memoir to a full-length book, but here he has done what he wanted. He has told us one story, in its two aspects. And he has done us a favour – the book is just as long as it needs to be, and no longer. And the publisher has given it the best possible frame imaginable. Deer Island is, I’d say, of roughly novella length, and ‘nobody publishes novellas’- let alone novella-length memoirs, yet here it is.

’Whenever I am asked for any advice I can offer to new writers, I never give the kind of advice that we often hear, about researching the market or building your platform. I always just say: Write from the heart.

Neil Ansell is also the author of Deep Country: Five Years in the Welsh Hills (Penguin 2011).

You can purchase Deer Island  direct from Neil’s publishers, Little Toller Books here as well as on Amazon.co.uk or Amazon.com

If you’d like to watch a video of Neil being interviewed about Deer Island, click here  and to listen to him reading from his book, here

Thank you so much, Neil, for guest posting on my blog about your wonderful book.

I really loved Deer Island when I read it, and awarded it five stars on Goodreads. I’ve copied the review below.

“This is a real gem of a book, which is best described as a meditation on what it means to belong. Set in the 1980s, it moves between Neil Ansell’s three years spent in a life of voluntary poverty working for the Simon Community, helping homeless people, his first trip to the remote Scottish Island of Jura, his penniless return to London living in rough squats, and a return trip to Jura. He describes each setting in vivid detail, moving with ease between the harshest orders of human urban existence, where fear and insecurity rule every day, and the wild beauty of an island with a small human population and unafraid wildlife.

Neil Ansell has a way with saying so much in so few words, in flowing and visual prose. It is a book that is an enriching experience to read, and one that I’ll return to time and time again”.