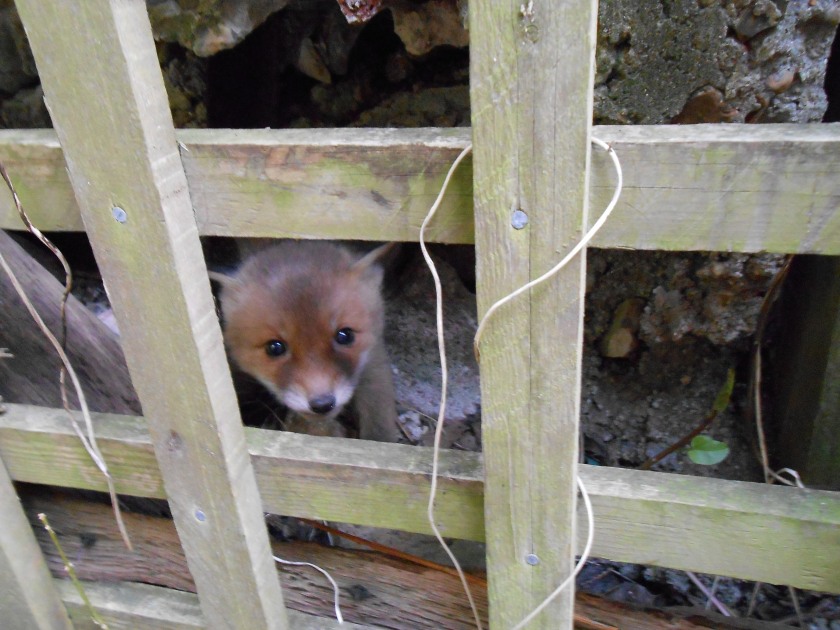 This is my first video ever, so please excuse the quality. Today’s learning curve — transferring a video from my camera on to my PC, converting the file from AV1 to wmp, and uploading it on to YouTube. Now I know how to do these three things, I can dream about making a book promotion video in the next couple of years. (note: that last statement is an example of positive thinking)

You’ll see from video that my dog and the cub begin by having a long staring contest, followed by a confrontation that’s all bark and no bite. From watching this feisty cub close up, I’ve decided wild animals, even when they’re five-weeks’ old, are not sweet and cuddly things. Just nobody put their fingers near a cub’s mouth, or you might come away minus a few digits.

I telephoned the local animal rescue people to check whether they needed to move the cub to safety, but they said leave it for 12 hours as the mother vixen is probably moving her litter one-by-one and has deposited her cub in a safe place (bad choice) and will return to collect her cub later. Good news, she collected her cub by midday, so I don’t have to contend with another sleepless night while my dog overturns chairs in the kitchen and bays through the kitchen window at foxes crossing her territory to move dens. Let’s hope the vixen has finished transporting her cubs now, and doesn’t decide to deposit another one behind my garden shed this evening. And just so you can all go “ah, isn’t it sweet” here is a still I took of the cub.

One labrador deep in the land of nod. She obviously decided my early morning excursion in the car meant I had gone out for the duration. Hopeless guard dog #chocolatelab #adogslife #seniordog #slumber #contentment
Such a beauty to grace my kitchen windowsill. This plant has produced three flowers a year for the last five years. Long may it live. #clivia #houseplants #orangeflowers #bloom
Decided to dispense with the bread machina & enjoy the calming therapy of kneading dough by hand. Am looking forward to a decent chunk of delicious granary loaf for lunch 🙂
😲 what a surprise! I'd no idea what wondrous tulips would blossom from those allotment shop bulbs. #gardening #potplants #springbulbs #tulips #march #happy #yellowflowers