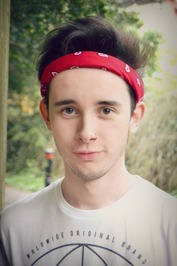 Jack Strange, or J. S. Strange, is a Welsh author who writes fiction. His début novel, Winter Smith: London’s Burning, is a zombie apocalypse novel and is available on Amazon. London’s Burning is the first in a zombie apocalypse series, but there are twists that make it different from your typical zombie story. Jack is twenty-one, and lives in Wales. He is currently working on the second instalment of Winter Smith.

Sarah says: Welcome to my blog, Jack, and I can honestly say that you’re the youngest person to have guest-posted here. I’m in awe of you having already written and published your first novel; a most exciting read it is, too. When I was your age, I just wrote naff poetry that was meant to contain profound truths but was probably a load of twaddle. It’s wonderful that you have so much direction and ambition, plus a whole creative life ahead of you following a decent head-start.

The story below is a write-up of a project Jack may be working on in the future — a collection of short stories following other people during the zombie apocalypse in London, at the same time as Winter is escaping.

A wedding day is something special, especially a wedding taking part in the middle of London. My wife had arranged it, completely blowing our budget on a venue that was a step down from where Princess Diana had married Charles.

But I was excited. Five years with the beautiful girl and I was about to become her husband. It was all I wanted. My friends told me I was too young. We had met at twenty, now we were twenty-five, but when you know, you know.

The venue was magnificent. Tall arcs of grand stone, moulded by people whose talents were incomprehensible. Rows upon rows of pews lined behind me, and I was surprised that we had managed to fill out most of them. Everyone looked beautiful. It really was going to be a great day.

I turned to my best man besides me. A man who had been in my life since I was twelve years old. We didn’t like to talk about it, but we both loved each other greatly.

“You ready for this?” He asked me, a grin across his face. “It isn’t too late to turn back.”

I held up my middle finger at him, and we laughed.

The vicar stood before me adjusted his position, and I knew that we were about to start. I heard the heavy church doors open behind me, and the music began to play. I heard everybody standing, murmuring with excitement, getting ready for the main ceremony.

The bride walked down the aisle. She held her flower bouquet in her petite hands, a smile on her veiled face. When she came to stop next to the man she was about to marry, she seemed to be afraid of looking at him.

I turned to her. She was stunning. I knew this wasn’t a mistake. This was the girl I wanted to marry and spend the rest of my life with. Someone coughed behind me, and someone whispered something in response, but I didn’t care about that.

“We are gathered here today, to welcome…”

There was a cry behind us. At first, I thought it might be a baby. But it sounded manly. It sounded pained. The vicar looked over our heads, at the source of the sound, and visibly paled.

Then someone screamed. I turned and saw a man rising out of the crowds. It was an uncle of my soon to be wife’s. He wore a charcoal suit, and had gone a dark shade of purple. He opened his mouth and sunk his teeth into the woman in front of him, her beige dress soon stained with her own blood.

In seconds she was convulsing. Her skin tightened and cracked. Her eyes became bloodshot. She had changed before everyone’s eyes.

In that time, the uncle had bitten others. People were scattering, forgetting the wedding and prioritising their right for survival.

I took my wife’s hand and tried to pull her away, but she remained rooted to the spot. I looked at her, confused. She lifted part of her dress, revealing her leg. I gasped. She had been bitten.

“When getting ready.” Was all she said.

Her skin was turning a nasty shade of purple. I wanted to vomit. I could hear people calling my name. I could hear them calling her name, too. I didn’t know what was happening, but the girl I loved had died before my eyes.

But she hadn’t fallen. She didn’t lie still in death. She stepped forwards, rather rigidly, and came for me.

I moved out of the way, so she took the next best thing: my best man.

He screamed as he was bitten. I was pulled away from the altar by my dad. Blood stained the stone floor, the decorations falling off walls as people ran by.

The vicar stood where he had stood when he had been about to marry us. My sister was biting into him. He was mid prayer.

I ran up the aisle at the end of the church, joining guests that had been invited. I recognised the odd cousin, an aunty from my childhood.

We burst out of the church, and my world fell apart. The wedding cars were left open, a body on the grass nearby. The photographer was in the middle of turning, into whatever the hell these things were. London was burning all around. It seemed the end had finally come.

Winter Smith: London’s Burning is available at amazon.co.uk and amazon.com