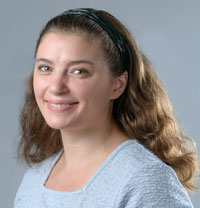 I’m delighted to welcome as my guest storyteller this month, fellow blogger and author Allie Potts.

When not finding ways to squeeze in 72 hours into a 24 day or chasing after children determined to turn her hair gray before its time, Allie enjoys stories of all kinds. Her favorites are usually accompanied with a glass of wine or cup of coffee in hand.

Allie is a self-professed science geek and book nerd. Today, she’s going to share a companion story to her novel, The Fair & Foul (Project Gene Assist Book One), which, as the title suggests, is science fiction of the cyberpunk/genetic engineering variety.

The following scene takes place a few weeks after Dr. Juliane Faris and three others have taken part in an experimental procedure granting unprecedented knowledge and cellular control over their bodies, but this same procedure could also very well cost them everything. 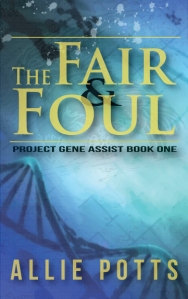 Error code 598: The stream is not a tiny stream. Chad snorted, Duh, as he bypassed the message and accessed screens of data. Music selected purely at random blasted through a pair of wireless bone conduction headphones. So in the zone, he hadn’t noticed Dr. Juliane Faris enter the lab until she was standing in front of him. She was always stunning, but when angry she could kill with her looks as easily as her temper. Chad cringed as he buried the thought deep down. His girlfriend, Nadia had a way of picking up what he was thinking and he definitely didn’t want to risk her picking up that particular observation. Although it wasn’t as if she had anything to worry about. Juliane may be his boss, but Nadia was his everything.

Juliane raised one manicured eyebrow. Chad waited. She tapped her ear with one finger. He cocked his head in confusion. As the meaning behind her gesture bloomed across his awareness, he pulled the headphones down. He felt his cheeks blaze, sure the color of his face now matched the color of his hair. “Sorry Dr. Faris.”

She sighed and shook her head. “I still don’t understand why you have so little faith in what we are doing here. If you’d only get the upgrade like the rest of us, you wouldn’t need all these extra . . .” she pointed at the headphones now draped around the base of his neck “. . . antiques.”

“What if something went wrong?”

“During the procedure?” Juliane paused, likely thinking about her own procedure. She, her research partner, Dr. Alan Dronigh, and the company’s acting CEO, Mr. Louis Evans, had all decided to act as guinea pigs one night. Chad fought to keep his hand from shaking. Even the thought of such a spur of the moment activity made him sick to his stomach. “I keep telling you, Betty and I recalculated the dosages. You’ve been pre-screened. The risk is negligible.”

“After?” Juliane repeated. “It’s been weeks since our upgrade and I’ve never felt better.” Her lips tightened as her brow knit in thought. She’s thinking about Mr. Evans again. Chad’s muscles clenched as he glanced at her face, praying that his expression betrayed none of the pity he felt for his boss. Juliane suffered pity like a cat suffered being drenched in water. An accidental splash too much, and you risked getting your eyes clawed out.

“You aren’t reading the gossip pages again? I thought I’d made my opinion of that garbage perfectly clear.” At first Chad was relieved at the change of subject, but then he looked over to where her gaze fell. He’d left his reader out and he could only guess what headlines would be featured on the front page. He searched her expression for any indication she’d seen more than the magazine’s logo and found nothing but her usual steel determination.

He ran to the desk and scooped up his reader only to stuff it into his backpack with his notebooks and personal belongings. The corner of one of her lips turned up. “Well, if you are in a running mood, would you mind running to get a cup of coffee for me?”

Chad grinned as he bobbed his head and raced out of the room thankful to avoid more questions that were better off without answers.