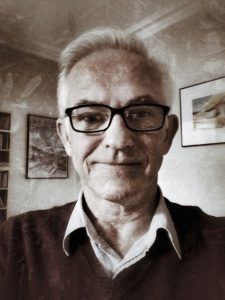 David was shortlisted for the Independent on Sunday Short Story Competition in 1997. His short story, Woman’s Best Friend, also appears in the IOS New Stories published by Bloomsbury. His poetry has been widely published in Ireland, Britain and the US in anthologies and poetry journals. David is the author of six feature-length screenplays, a collection of short stories, a poetry collection, two stories for children, and his first novel, Love is Blood. He has just finished his second novel, Peripheral Vision.

Sarah says: Welcome to my blog, David, and thank you so much for being my first guest storyteller for 2015. This January is somewhat of a celebration, as it’s exactly a year since I began this  monthly guest slot, which started out as an experiment but has really taken off.

Below, you can read an excerpt from David’s latest novel, Peripheral Vision, about a young boy blinded by his father and his subsequent descent into a life of crime and drugs.

When I came round, the smell of detergent seared my nostrils. I was looking up at a white, paint-peeled ceiling and a buzzing neon strip light. But something wasn’t quite right about this picture. As though I could only see half of it. Gently, I put my fingers to my left eye and felt soft fabric.

“Hey, here he is,” said my mother, in a voice as soft as the bandages. “How you doing, champ?”

I made a small smile but I felt very drowsy. There was a rakish ringing in my left ear and a burning sensation like someone had inserted a red-hot needle into the left edge of my eye socket.

“You’ll be right as rain in no time.” It was my dad’s voice but I couldn’t see him as he was standing at the left hand side of the bed. I saw my mum cast him a malevolent glance. I caught a glimpse of the side of her face. Her left eye was purple and yellow. She turned back to me and her expression immediately returned to one of radiance. Her beautiful long, black hair was tied up in a bun on the top of her head. She was a vision, my mother. Her cobalt blue eyes sparkled, glassy with tears. She reached out and took my right hand between her palms. They were warm and comforting.

“As soon as we get you out of here we’ll go off on a day trip. How does that sound?” she whispered.

It sounded fine, I thought.

“How about Blackpool? Or Bridlington? Which do you prefer? It’s your choice,” she said.

“How come he gets to choose?” It was Jed’s voice. I didn’t realize he was in the room.

“Oh, shut up!” Mum spat, as she turned to a space over to my blind spot. Is that it? Am I blind? I was trying to remember what happened. There was an argument, I think. Dad – moving fast toward me. My legs like jelly. Nothing.

“What happened?” My throat hurt when I spoke. Like I’d swallowed broken glass.

“It was an accident,” Dad said a little too swiftly.

There’s that glance again from Mum.

“You fell and banged your head on the sideboard,” Mum said.

A snigger from Jed.

“I shoved you to get you up to the toilet. And, and when you turned around, you slipped and fell.” This was Dad’s defence.

Perhaps it was because I couldn’t see him that I felt brave enough to defy my father, but something didn’t quite stack up in my confused mind. “If I turned to go upstairs wouldn’t I have banged my right eye on the sideboard?” I said, directing the question to my mother.

She smiled sweetly and closed her eyes in a slow, slow blink, inhaling deeply. When she opened them again they were cast toward Dad, awaiting a response, but none was forthcoming. I could tell by my mother’s smug expression that she was pleased with my question and the lack of response it had elicited from my father.

I spent three weeks in hospital while they monitored my fractured skull. Well, it was my eye socket really, but they classed it as my skull, which made it sound a lot more dramatic than it actually was. To be honest, I was glad to be out of the place. I had a numb bum from being in bed all day and there’s only so much jelly and ice cream a kid can eat.

You can find the links to previous guest storyteller posts at https://sarahpotterwrites.com/guest-storytellers-2/