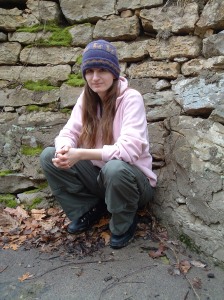 Leigh Ward-Smith has a journalism and editing background, but fiction, poetry, and creative nonfiction occupy most of her current brainspace. She blogs at Leigh’s Wordsmithery  but also tweets, tweaks her wordcraftery, and sometimes opines on Twitter @1WomanWordsmith or on Facebook.

[quote] “I credit Serendipity with helping me discover Sarah’s blog, for which I’m very grateful, and I thank you all for taking the time to read my work”.

Out of a group of genetically enhanced humans with canid capabilities, a female and male study subject battle for dominance with increasing aggression. One researcher monitors them from a distance, mindful that the study could spiral out of control but determined to see who will emerge as Alpha.

“Observation is the most pervasive and fundamental practice of all the modern sciences, both natural and human.” — Histories of Scientific Observation, edited by Daston and Lunbeck

Brandon tore a clot of hair from Thea, not appearing surprised when she snarled. She wasn’t one to whimper. By arching her back she’d managed to get them to pinwheel a few times, but then he splayed across her again, his panting animal form struggling to pin hers.

With another strong upthrust of the broad, muscular plain of her back, Thea flipped Brandon’s bulk just far enough away for her to roll opposite and get partly upright, but still lupine. If she could have expressed herself in human terms in that instant, she’d have said that a lone instinct seized her mind by its muzzle and shook it violently side to side. The buried impulse rose up, gutturally thumping and pronounless:

When she twisted her tongue out, grazing her mouth’s corner for a tentative taste, she found salt and grit mingling with thready saliva.

“You can’t get away, T.” Brandon talked his tough wannabe talk as he took a half-step backward, never lifting his eyes from the forest floor. “Give it up.”

Even though she glared and gnashed bared teeth, he kept up the chatter. At a distance.

“C’mon, show me your yellow belly,” he called, his scratched-up lips peeled back in a grin.

That must have raised all kinds of hackles, fully human and otherwise, for she loped the since-blossomed distance in a hummingbird heartbeat. A miniature maelström of organic materials whorled the air in her quick wake.

Brandon had no time to prepare. Either repulse or countermove. With Thea’s head cocked to the side like that, it appeared that she had gathered some grim satisfaction from his shocked yelp, which also hurt my quotidian ears, even at this distance. With the finely calibrated instruments in my use, I could even measure, calculate, and record the give and recoil of the cypress that caught Brandon in the shoulderblades and mid-back. From the handheld, I saw that it wrested 89% of the oxygen from his barreled chest in an anguished “arhhhh.” Even the trees seemed to give credence to the rightness of research subject 209B’s counterattack.

She has to knock down this whelp a few more notches, I thought as I watched from my blind hunkered down with long-range binoculars, barometers, and the like activated—yet organically disguised—to measure everything from wind speed to body heat to brain-wave activity through utilizing an MRI machine, which included an MR angiogram to measure arterial and venous flow. Some might remember such previously stationary and cumbersome devices from the history files, but ours was a portable ultra-long range resonance imager that could measure brain activity, flow, and structures at up to 1000 meters. And getting better all the time.

Of course, subject 5157R was unwise to challenge Thea’s pawed-out pecking order, her rightful place, among this branch of The Enhanced.

My current research subjects think that the vast, burgeoning newly engineered world is theirs to claim through the bravery born of their genetic gifts. Their enhancements are the spoils of R and D. Including robust physiological and psychological make-up, these cases have been shown to be evolving at speeds never before seen in my previous benchwork or in a literature review done by my colleagues Tolk and Pinell at the Solar University of the Americas. The subjects’ already manifest, and manifold, puissances were in fact palpably expanding. The clinical trial was no longer controlled by us, the Kingdom Animalia Plus Research Group. Our former intellectual quarry—unwittingly surveilled subjects—were not mere guinea pigs. They had turned around and slaughtered just about every expectation, every illusion of scientific control and decorum.

And it was there that I began my research chronicle, prepared for those learned ones who would tread after me, if any did. It was impossible to begin at any other place than at 209B Thea’s climb to extended dominance among The Enhanced.

Sarah says: Thank you so much, Leigh, for your awesome contribution as this month’s guest storyteller. I wish you every success with writing the novel to follow this prologue, and look forward to seeing the finished product.

To read more of Leigh’s writing, which embraces speculative, dystopian, and science fiction, do visit her blog, Leigh’s Wordsmithery.

You can also find the links to previous guest storyteller posts at https://sarahpotterwrites.com/guest-storytellers-2/