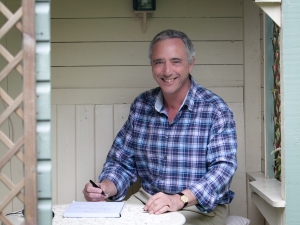 I’m delighted to welcome Geoffrey to my blog to chat about his début novel Saxon’s Bane and various aspects of his writing life, including what he’s working on at the moment.

On Amazon, I  awarded Saxon’s Bane five stars and titled my review “A Superb Debut Novel by a Master Storyteller”.  I won’t tell you what the story is about, as Geoffrey is going to do that. All I can say is that I found it an exceedingly exciting read, of the sneaking-looks-when-you-should-be-working variety, and one of those novels your mind keeps returning to long after you’ve put it down.Geoffrey managed to make me care deeply about the fate of the three central characters (plus the horse), raising my pulse-rate far too high on occasions, while causing me to wish the stickiest of ends upon the baddie and his cronies. He paints a wonderful picture of a present-day English village: one rooted in a more savage past that, once unearthed, reasserts itself upon the psyches of so-called civilised people.

SP: Who is Geoffrey Gudgion? I know, but perhaps you’d like to tell the others.

GG: I’ve been many things. A Royal Naval Officer, but they weren’t quite ready for me, and a businessman, which paid the bills even though Corporate America wanted my English soul. Now I have one part-time job but mainly write. When not writing I go a bit mad on horseback. I’m married with two great kids who are old enough to be off the payroll. Oh, and I’m a really bad pianist. Is that enough? 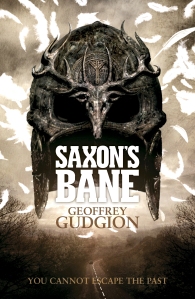 SP: For the benefit of potential readers, could you describe Saxon’s Bane in a few sentences?

GG: It’s a thriller with a supernatural twist. An archaeologist shows a preternatural understanding of the Saxon couple she is excavating. A young man comes close to death in a car crash. Two people whose insight might be dismissed as obsession or post-traumatic stress, until the modern world around them starts to mirror the ancient, bloody past…

SP: Despite ending up with Solaris as your publishers, when working on your novel you had no idea it was fantasy novel. What sort of novel did you think you were writing?

GG: I simply didn’t understand ‘genre’. I had a story that was fighting to land on the page, that’s all. When it was published, people started labelling it ‘fantasy’, which surprised me because it’s meant to be believable in a real world framework. It’s also been called ‘horror’, although I think it’s a bit too lyrical for that, ‘historical’, even though 80% is set in the present day, and ‘literary’, which is good for my ego. Hell, it’s a ghost story.

SP: Like many creative people, you felt obliged to go down some “respectable” career paths first. Do you see this as wasted time, or as useful experience to draw upon in your writing now? And you don’t have to answer this if you don’t want to, but is your main character Fergus’s explosive walk out from his job based on your own experience?

GG: Wasted? Nah. All life is a script, and life in the Boardroom gave me a wonderful supply of characters. And as for Fergus’s row with his boss, who hasn’t relished the thought, perhaps many times in their career, of telling the bastard on the other side of the desk what they can do with their job? I loved writing that bit.

SP: In your novel, you paint an extremely vivid picture of the English countryside and rural life. A reviewer complimented you on your ability to revive and modernise the great classical tradition of rural British horror, proving there’s nothing creepier than the countryside. Is there a time when you’ve freaked yourself out with your own imagination and had to run for civilisation without looking back?

GG: No. That must either mean I’m writing tame ‘horror’, or I’m really sick. Seriously, though, it is the unknown that freaks us out. As a writer, you know what’s coming. And if you don’t, you’ve lost the plot and that IS freaky.

SP: An emotionally damaged horse features greatly in Fergus’s convalescence following his near-fatal car accident: a sort of mutual healing between man and beast. Is there any parallel between what you 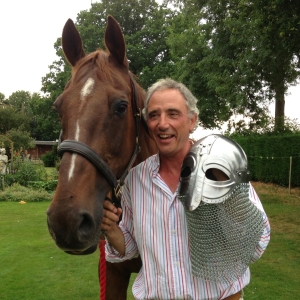 describe in your novel and your relationship with that handsome horse you own in real life?

GG: Horses possess a deep, wild empathy. They can understand us at a primal level, and unlock emotions that are buried within us. No horse has ever healed me in the way that Trooper heals Fergus, but horses have helped me keep my equilibrium. I can climb into the saddle tense, but the mental slate is wiped by the adrenalin-charged madness of a gallop, or the surge-and-soar of jumping.

SP: Now you’re not burdened with a day job, how do you organise your writing time and physical writing space?

GG: It depends on the stage I’m at with a book. On a writing day (and sadly that still can’t be every day) it’s tough at the beginning of a project and I have to force myself to craft words. By the end, it becomes and obsession and nothing else matters. It’s a bit like wading out into a river, slow and muddy at the edges, but once the current takes you it’s quite a ride. I write best in the mornings, and my most creative space is an arbour in the garden. When it’s too cold for that, I have a study where I play English birdsong as a background while I write.

SP: Now you’ve nearly finished your next novel, did you suffer or are you still suffering from any of the “second novel” anxiety experienced by some authors?

GG: I did at the beginning. I started Saxon’s Bane in hubris (“I can do that!”) and finished in bloody-minded stubbornness, determined to break through despite the rejections. By the time my agent Ian Drury accepted it, I knew what good looked like. The first drafts of my second book, Catherine Bonnevaux, were not good, and I had to learn to push on and leave imperfection behind me. I’d written 120,000 words before I knew it could be turned into something good.

SP: What is the second novel about?

GG: When newly affluent businessman Paul Devlin and his girlfriend Fiona buy a barn conversion near Halstead Hall, the ancestral home of the Bonnevaux family, they believe they are buying a rural idyll. They are met by a wall of resentment, and are drawn into a conflict that has its roots in pagan times. It’s a ghost story that interweaves modern greed with medieval piety and Dark Age myth. There’s a fuller overview on my web site at http://wp.me/P2FmIH-aR

SP: Having spent time in the Royal Navy, would you consider writing a contemporary maritime fantasy novel drawing on some of the wonderful sea myths?

Last year I went sailing with a friend, and we moored one night in a remote inlet where a Saxon church sat hunched on the shoreline and the bones of dead sailing ships poked through the mud as the tide went out. The setting gave me some ideas that may well surface in a future book.

Sarah, thank you so much for inviting me onto your blog. I’m honoured to be here!

And thank you to you, too, Geoffrey. It’s been a great honour and pleasure to have chatted with you. SP 🙂